Standing in the crowd below the podium she pulls the enerjon blade out of its holster beneath her skirt. Of the old design, it’s activation switch is a simple push and hold system. The current favourite flavour of the masses that watch the arena fights. After all, there’s nothing better than watching a person who’s weapon won’t work because they no longer have the strength to hold the button in. Thinking back to the events that brought her to this place, she grips the ring hanging on a chain around her neck. Even now she can still feel the breeze on her face the day he asked her to marry him. On the seaside cliff overlooking the little fishing village where they had lived. It had been a peaceful life and before too long it had been perfect with the arrival of her daughter. Then the slavers came. Those that were weak were taken for the small jobs and the strong were shackled to become fodder for the arena. Fortunately enough for her, she had been away on the day of the attacking. Arriving home she had stumbled across the ruins of her village. And in the ruins of her house the unthinkable. The burnt remains of her husband and daughter. Murdered because they’d refused to comply. Taking the ring from his hand she had painstakingly dug two shallow graves and buried her loved ones. Swearing justice she had set off. Months went by and with it came the realisation of the sweet poison she had been living on. It wasn’t justice she wanted but bloody vengeance. Coin in the right hands and well-placed threats had gotten her the name and location of this arena. A cry from the crowd brings her back into the present. Looking up she watches as a man walks out onto the podium. Arms raised he hushes the crowd.
“Thank you, everyone, for coming. Some of you volunteered for glory, others for redemption. Whatever your reason, what you seek is beyond these doors. Welcome to Varinko. The greatest arena in the world!” At his shout, the large double doors open to the gathered contestants. Looking down at her blade once more. Pulling a strip of cloth from her pocket she begins to tie it around the activation switch. Even knowing that activating her blade here means certain death, she readies herself to hurl it at the man who destroyed her life. Stepping back she pushes the switch. With a humm the blade begins to spring into life. With a heavy thump, she’s knocked off her feet. Landing heavily on the ground, she drops her blade, deactivating it instantly. Rolling to her feet she gathers the blade and turns to find a young plains woman standing in front of her. Ignoring her she looks back to the podium finding it empty. Filled with anger she turns and grabs the women by the shirt.
“Do you have any idea what you’ve done? He was right there!” Grabbing her hands gently she removes them from the front of her shirt.
“I saved your life. You don’t realise it yet but you’ll be thankful I did. Even if by some miracle you’d managed to strike him down your vengeance would never have been completed. You would’ve died before you got to see it.”
“You know nothing of my vengeance!”
“I know everything. Family murdered, you’ve been chasing that man for months now. I know because I’ve been tracking you. If you want to make him pay then follow me. I’ll get you what you want. Without me, you’ll be dead by weeks end.” Holding out her hand to the other woman she waits for a moment. Taking the young woman’s hand, she introduced herself.
“I’m Ellenia. If we’re going to be working together you might as well call me Elle.” Smiling the plains woman introduces herself.
“My names Yumellisar. But you can just call me Yumi.” Letting go of the others hand both women turn and walk towards the arena, and for the first time in a long time, Elle begins to feel hope in her heart. 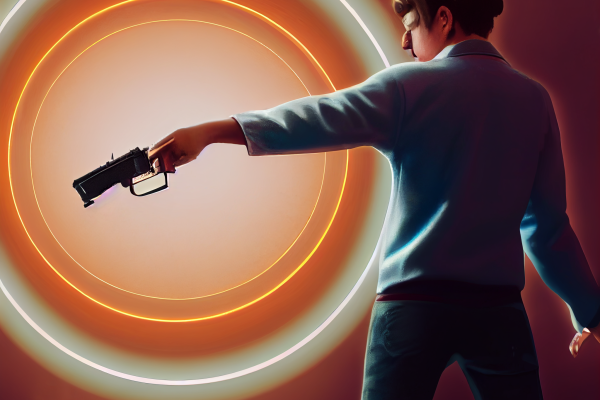