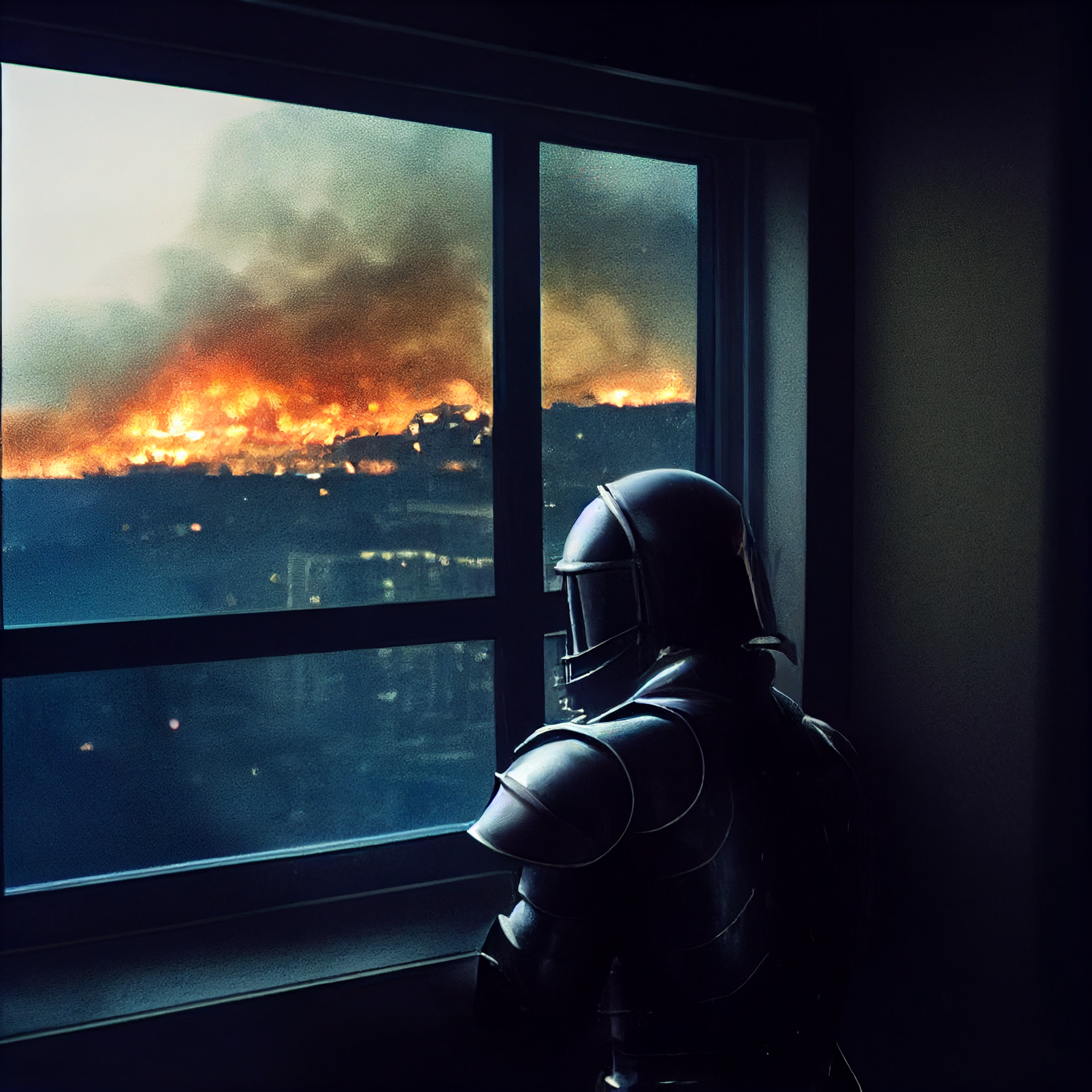 The sound of sirens in the distance finally fades in the background. Standing up from his desk, Grand Marshal Caden Saunders throws down the paperwork he was thumbing through. Walking over to the window, he looks down at the city below, watching as people struggle to put out fires in the streets.

“We barely held out this time Amirah. The demons reached all the way to the gate of the Vatican. I never thought I would see such a thing in my lifetime yet here we are.”

“I warned you this would be the outcome Caden. And now, it all comes down to one final gamble.”

“You really think he’s the best choice for them?” Leaning forward in her seat, a black-haired woman picks up the paperwork that was thrown on the desk moments before. Adjusting her glasses, she flips a few pages before replying.

“Of course, he is. He’s a veteran in fighting Demons and has the highest rate of success on tough missions. He is also combat trained, unlike most of the other Paladins. That alone should qualify him for the role. If you need further reasons, he’s the best fit for them, you only need to look into his past. Men like him are dedicated and reliable.” Turning from the window, Caden takes a seat and picking it up from is desk, he draws a long drag of a cigar. Breathing it out slowly and heavily, he looks Amirah in the eye.

“He also has the highest fatality rate for his Lancers. At the fall of Anbushire, he was the only survivor from the entire twelfth platoon. Nine Paladins and fifty Lancers lost their lives in that accursed city, and he was the only man left standing. The ones that he doesn’t kill, he maims or pushes them well past their limits and burns their lancer ability out of them. And you would put him in charge of the most powerful squad we’ve ever assembled?”

“Why? I don’t understand this blind faith you have in the man Amirah. I really don’t.”

Standing from her seat, Amirah places the paperwork back on the desk and smiles at Caden.

“I have seen what he’s capable of as a Paladin. Besides Caden, when has trusting me ever led you astray?” Groaning at the woman, he reaches for a stamp and slams it on the paperwork.

“All the damn time. Don’t make me regret this.” Taking the paperwork from Caden, Amirah smiles at the word ‘Approved’ stamped on the request in red letters.

The click of heeled boots echoes in the bases steel lined corridor. Walking with purpose, two women take no notice of the rooms and people they pass.

“What do you know about our new Paladin?” Looking over at the shorter of woman, the taller of the two grimaces before replying.

“Nothing much. I hear he has a bad rep for losing squads. But that’s as much as I know.”

“Ha. Well, he won’t survive long here then. I give it a month before he quits. Just like all the others.”

“Come on Eva. You really think he’s got the strength to keep up with us? There’s a reason our squad has the name it does. We go through more Paladins than the rest of the squads in the Vatican put together.” At Lana’s last statement, the two women fall silent and carry-on walking through the bases’ steel hallways. After a few more moments of walking, they arrive at a frosted glass door. Pushing the glass panel on the outside, Eva stares at Lana as the door opens with a hiss.

“I guess so.” Stepping inside the room, three more women around the same age greet the two women as they walk in. Standing at the front of the room behind a desk, a greying lady gestures for the two to sit.

“Now they we are all here, let’s get down to business. HQ has provided you with a new Paladin. His name is Magnus Elwood.” As she lets the name out, the girl’s gasp and Lana stands up.

“Are you serious, Miranda? The Calamity! This is total BS, and you know it.” At her outburst, the older woman scowls.

“Sit down Lana. First, do you need another reminder of etiquette? It’s Lady Bowen or Ma’am when we are on base. And second, this is an order from the head of the council himself. It’s not something either you nor I have any say in. And I tried to have a say, but they weren’t open for discussions. They way they see it, you girls are the best at what you do. But you burn through too many Paladins. In their eyes, by putting him with you, they’re eliminating the problem. He’s…”

“Expendable.” All the women turn and look as a man’s voice comes from the doorway. Stepping into the room, a young man walks in. His black military attire contrasting with his white hair and amethyst eyes. But it’s the ugly scar running down the left side of face that draws the girl’s eyes. Stopping at the front desk, he bows deeply towards Miranda.

“As I was saying, this order comes directly from Marshal Doyle and was signed off by the Grand Marshal himself. From today onwards, Mr. Elwood is your new Paladin.” Turning towards the young man, she gestures to the room.

“The floor is yours.” Stepping to the front of the room, the young man looks at the gathered women in front of him. Carefully weighing each one. With a small sigh, he reaches into his pocket and removes a small, flat disc-shaped object. Placing it on the side of his head, he taps it once with a grimace and a small whine, it affixes itself to him.

“Right, let’s get this done. Everyone sync up now. We’ll go over the rest in transit. We have standing orders to report immediately for duty after roll call. Now, given the urgency of the situation, I’m skipping roll call and going straight ahead with the sync. After which, you are to gather your gear and meet me on pad five for transport.” Stepping up from her desk, Lana slams her hands down hard.

“You can’t expect us to be ready for battle so soon after sync. Are you out of your mind?” Walking from the front of the room, Magnus stops in front of Lana. In a single movement, he grips the front of her uniform and draws the pistol from his hip. Pulling her forward, he places the barrel against the base of her jaw and clicks the safety off.

“You must be Alana Bowen. Lana for short. The hotheaded leader of this squad. Let me get one thing clear. You will follow my orders, or I will kill you myself. Understood?” Swallowing her fear, she looks into his eyes with defiance.

“Understood.” Releasing her, he clicks the safety on his weapon on and slides it back into the holster on his hip.

“The same goes for all of you. I don’t know what kind of half-baked Paladins you’ve had running the show prior to my arrival, but things are going to be vastly different from now on. Now, sync up.” For a moment, all the girls’ eyes glow crimson as their consciousness connects to his.

“Right, grab you gear and meet on pad five in ten minutes. Dismissed.” As the girls hurry out of the room, Miranda Bowen approaches Magnus.

“Was that necessary, Paladin Magnus? I hardly think threatening the girls will get the best results.” Turning to meet the older woman’s eyes, a blank look crosses his face.

“It was. Lady Bowen, I am sure you have read all about me. I don’t lead from a safe place like other Paladins. I’m a soldier foremost and a Paladin second. And on the battlefield, there is no place for questioning decisions and insubordination. Mark my words, they will follow orders or I will kill them where they stand.”

“Are you really willing to go that far? What point does shooting one of our own achieve?” Walking away from her, he stops and looks back over his shoulder.

“To end this war, we need soldiers that follow orders. If they can’t do that, they have no place being on the battlefield.”

“Their women, not soldiers. You, of all people, should know that.” For a moment, a dark look crosses his face.

“They became soldiers the moment they agreed to become lancers. Like it or not My Lady, this is a war.” Without another word to her, Magnus turns on his heel and walks out the door. Shuddering at the look in his eyes, she grasps her chest as he leaves the room. Terror coursing through her body.